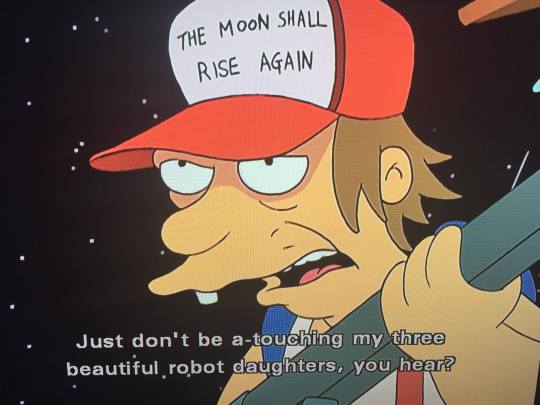 Fry, Bender and Leela head to the moon and meet some space hillbillies, while we are introduced to the rest of the regular cast for the first time. It’s gonna be fun on a bun!

Welcome back to Futuramarama, where I, Matt Waters, will be writing about every single episode of Futurama in order and attempting to determine its ranking. Last time around that was pretty easy given there was only one episode to rank, but here in our sophomore outing, it’s time to make an actual decision and determine whether Episode 2 is better than Episode 1. I can already sense you’re on the edge of your seat! 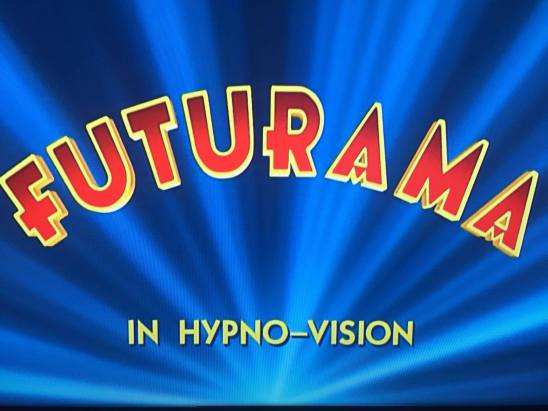 We kick off with The Professor attempting to drum up business for the new crew of Planet Express through a commercial that will air during the SuperBowl… on a different channel. This isn’t all that remarkable, except for the inclusion of our next recurring character Horrible Gelatinous Blob, who will apparently eat employees of companies who don’t use Planet Express. That would work and you know it would work. 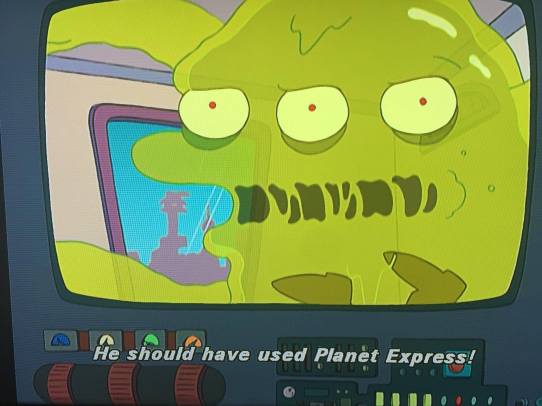 We come out of the credits to meet Hermes Conrad (Phil LaMarr) for the first time. According to The Professor, Hermes runs the business end of the… business. And if not for Hermes we wouldn’t have any idea who the captain of the crew would be! The Professor makes the not at all difficult decision after passing over Fry stuffing his face with bacon-infused treats and Bender belching fire. 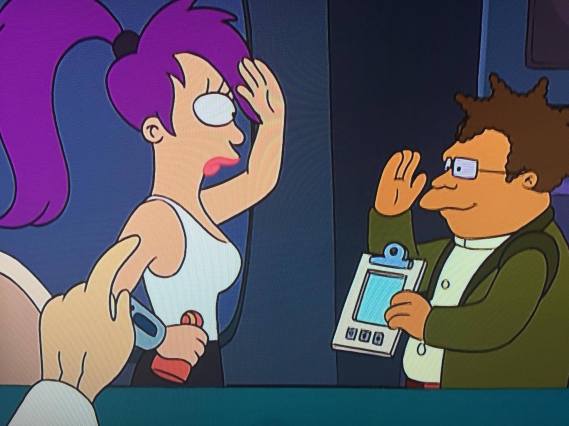 Fry meanwhile needs to be medically cleared for space travel despite having made his first flight at the end of the previous episode. I suppose doing so when fleeing the police doesn’t count. And who will be administering this physical exam? Why Dr. John Zoidberg of course! 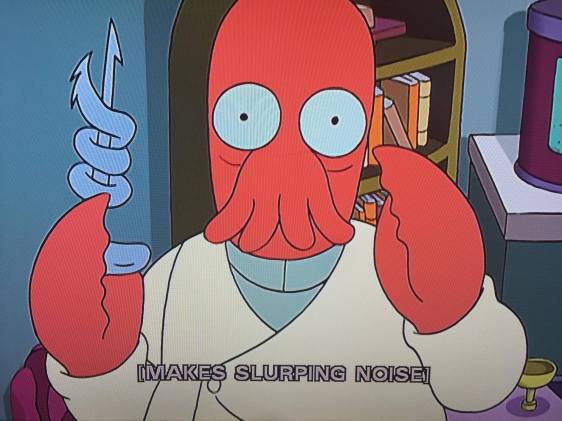 That’s right, the best supporting member of the main cast (and worst to focus an episode around) didn’t even make it into the pilot. For shame. Needless to say, Zoidberg fails to do his job for what will definitely not be the last time. Maybe the upside down poster of human anatomy should have been a give away. Before the crew’s first mission can get under way, Fry has just one more member of the main cast to meet: Amy Wong, wealthy heiress and one of The Professor’s engineering students from Mars University, who Bender immediately robs. 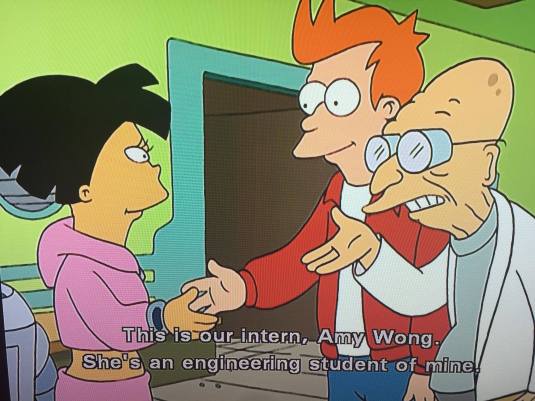 Where will our intrepid heroes be heading for their maiden voyage? ‘Nowhere special. The Moon.’ While this notion is positively banal for Leela and the others, precious star child Philip Fry is obviously ecstatic. 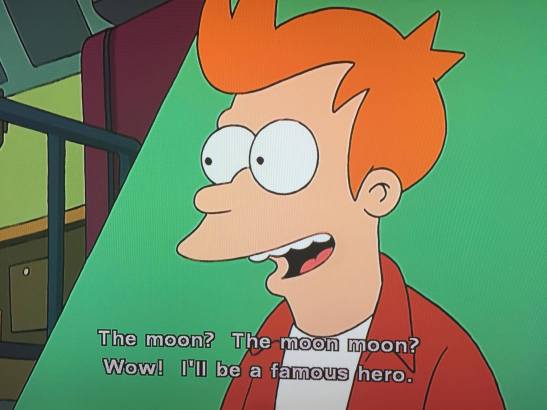 Amy tags along as a lover all of things tacky, and Fry quickly learns that The Moon is essentially a giant theme park in the year 3000. Still thrilled, he pleads with Leela to visit but our new captain is determined to remain professional, insisting they deliver their crate. Fry wants to dump it in the sewer instead, but Bender has a much better solution: 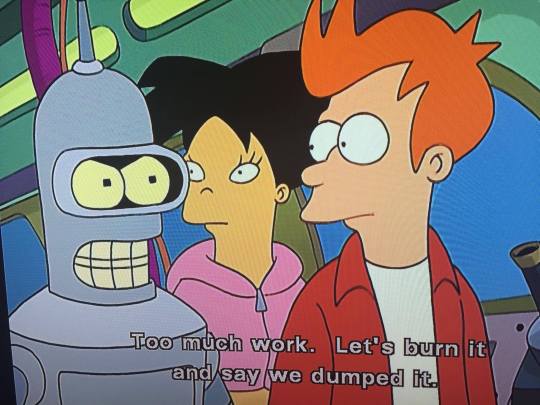 Fry eventually gets his way by pathetically pointing out he’s never been to The Moon before, which is about as reasonable as he’s ever been. Leela relents, but demands they do their job first. Along the way Amy manages to drop the keys to the ship inside the crate which they deliver to another recurring character, the always friendly Sal. 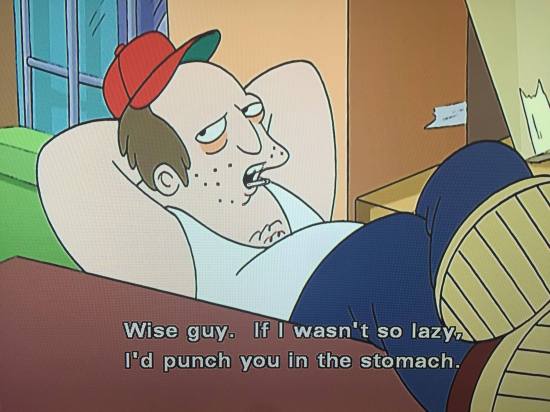 With their life and death mission accomplished our foursome – blissfully unaware they no longer possess the means to return home – begin wandering the park. Thanks to Fry being a grade-A sucker for tourist junk we get the debut of a legitimately wonderful ongoing concept; You see, Bender is robotic, and as we were all warned as children, it’s dangerous to place magnets near computers. Even fridge magnets like the ones Fry just bought. But what are the dire consequences for our loveable rogue, Bender? 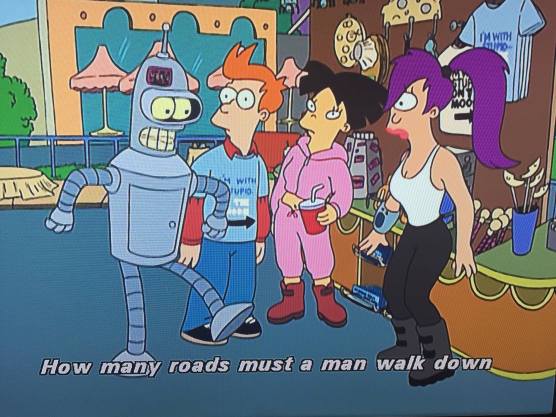 That’s right, exposure to magnets make Bender start singing folk music! Or rather, magnets interfere with his inhibition unit and he has a secret dream of being a folk singer. BOY is that going to pay off in spades down the road.

After riding around the ‘Whalers of the Sea of Tranquility’, featuring an intentionally terrible and irritatingly catchy song called ‘Whalers On The Moon’, Fry begins to grow tired of the kitsch nature of the theme park, desperate to actually walk around on The Moon like Neil Armstrong. Leela seemingly sympathises with his plight, only to discover the Lunar Rover Ride is no more authentic than the rest of the park, even casting Jackie Gleason as an astronaut. Luckily, historian Philip Fry is on the case. 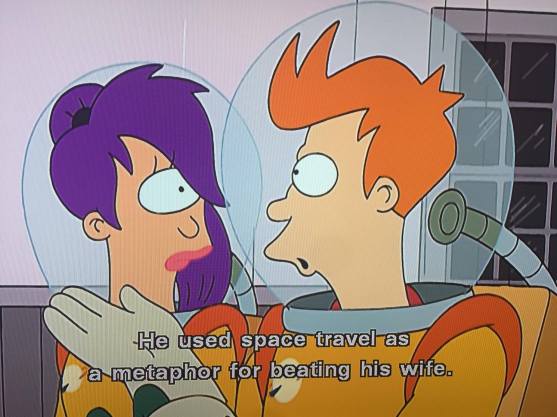 Tired of this nonsense, Fry decides to take matters into his own hands, driving the rover off the track and out onto the lunar surface, determined to find the long lost site of the original moon landing. Of course things immediately go south as he crashes the rover and they expend most of their oxygen.

Meanwhile, Amy, having noticed the contents of the crate including the keys get dumped into a claw machine, endeavours to win them back while Bender offers various advice, most notably comparing successfully operating the machine to making love.

Fry and Leela manage to find a farm with its own oxygenated dome before perishing, but are accused of trespassing by a Moon-Hillbilly who insists they do chores until sunrise in exchange for an oxygen refill. His generous offer comes with one catch however: they’re to keep their hands off his three beautiful robot daughters. But that may prove difficult given that among their ranks is the best recurring character so far, The Crushinator.

Sure enough, after being tossed out of the park for attempting to cheat the Handygrab machine, Bender violates this rule, forcing the trio to flee in a stolen Rover which breaks down almost as quickly as the first. Forced to continue on foot, Fry and Leela are barely able to stay ahead of the dark side of The Moon while Bender ambles along behind them. The Professor, observing all of this through a high-powered telescope, gets some pretty solid usage out of the same joke two weeks in a row when justifying not helping them: 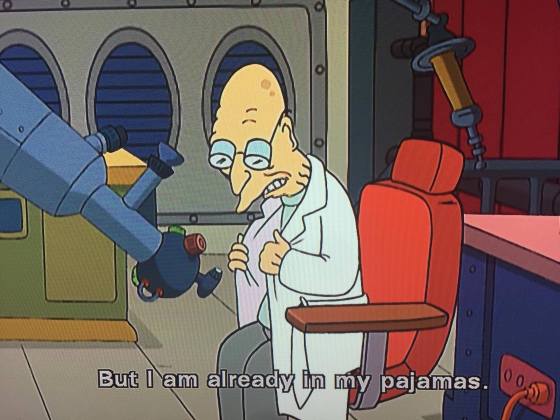 As far as I remember, that streak ends at two and the joke never returns. Shame.

Coincidentally finding the Moon Landing Site, Fry is ecstatic, but Leela scolds him and demands he take shelter from the cold within. Fry complies, albeit sporting a hurt bunny look. Yes, it’s time for our second heart to heart talk between Fry and Leela, with our protagonist revealing he used to dream of being an astronaut, and with the assistance of some gorgeous animation, Leela comes around to his way of thinking about space. 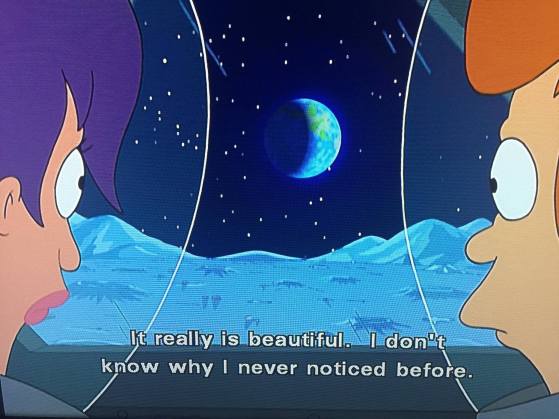 The tender moment doesn’t last long though, with Bender running away from the Moonbilly once more, this time aback an enormous combine harvester that’s heading straight from the lunar module! Luckily, Amy has spent the entire episode mastering the claw game and scoops up Bender and the module using a magnet… and you know what that means! 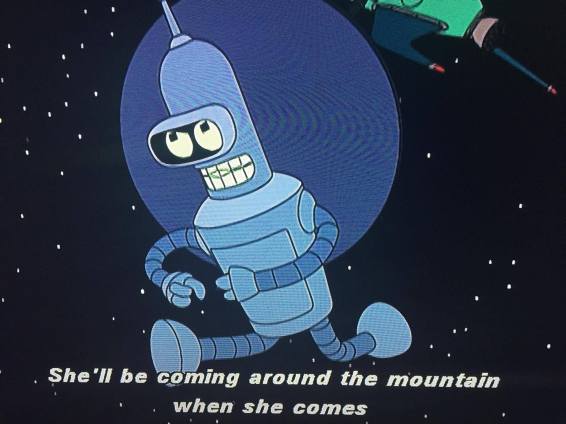 While this episode feels far more typical of what Futurama is all about and has a better energy about it because of the slightly larger cast, and there are plenty of fun little moments, I still prefer the pilot because of how effective a job it did of showing us who Fry is straight away. All the individual elements are good, but the final product just isn’t quiiiite there yet, even if it does establish the formula for most of the rest of the series. It just isn’t able to hang with the more high-concept episodes that would follow, even if it is probably best to ease the audience in with something slightly more familiar.

So, anticlimactically, our list maps 1:1 with the running order so far. That’s definitely going to change next time though… Anyway, on to the extras!

I’m a big fan of the fake video game ‘Gender-Neutral Pac-Person’, Bender’s twin rants about blackjack and hookers, and aligators wearing space helmets, it’s The Crushinator’s PHENOMENAL refusal to continue chasing Bender that tickles me most. 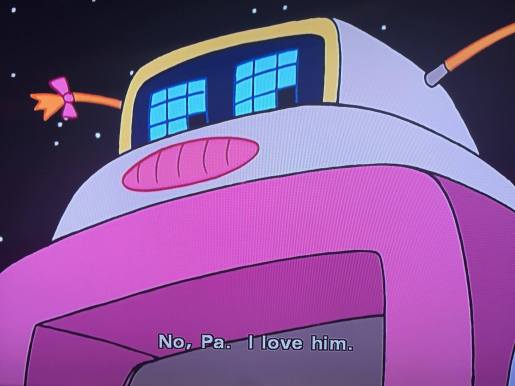 The writers of Futurama invented an alien language thinking it would be fun for the audience to spend weeks and months gradually decoding it, giving the episodes replay value. Well, the audience figured it all out after the pilot episode, but the episodes still have replay value nonetheless!

Seen the show a lot, listened to the commentaries a lot, swear they’re funny and interesting, yadda, yadda, yadda.