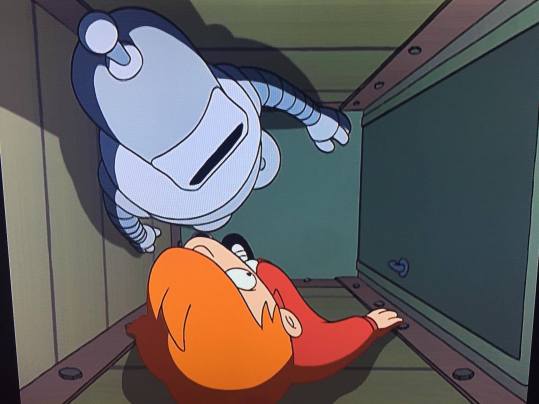 Ever stop and wonder ‘where the heck has Fry been living since arriving in the Year 3000?’ Well wonder no more, Futurama fans, because it’s time to rank another episode!

Welcome back to Futuramarama, where I, Matt Waters, will be writing about every single episode of Futurama in order and attempting to determine its ranking. So far it’s been pretty straight forward, with the pilot retaining it’s position at the top of the pile, but things are about to get interesting, because (spoilers) I, Roommate is pretty good.

Okay, not only is there no cold open for this episode, but there’s also no title gag (at least on region 2 DVD, the Internet seems to think it’s ‘As Seen on TV’). If these rankings used a points system, this one would be off to a bad start!

Still, we finally learn where Fry has been sleeping in the time between arriving in the future and now… which is also the future. Ouch, my brain.

Yes, young Philip has been sleeping at Planet Express headquarters, and after some detective work, Hermes eventually realises Fry’s presence is attracting owls (which have replaced rats as the primary vermin in the Year 3000) and has tripled their water consumption, so naturally, everyone wants him to find a place to live.

Before he does so however, he and Bender discover they’re pretty good at sitting around watching the popular robot soap opera, All My Circuits, which the writers seem to have a pretty fun time trying to escalate in terms of ridiculousness each time we see it. Furthermore, this is our introduction to the lead actor of the show within the show, Calculon (Maurice LaMarche) who in time, will rank pretty highly on the best recurring character list. I’m also partial to Boxy. But what about the Human Friend?

After being forcibly dumped out on the street, Fry laments about his situation until Bender takes pity on him and offers to take him in, but not before delivering some crucial exposition about robots needing alcohol to replenish their power cells, something that will be important later this episode and as part of the ongoing series continuity. Thrilled to have found a place to stay, he takes up Bender’s offer at once, something he’ll immediately regret…

One week of sleeping in a ball on the floor next to a robot who talks in his sleep about killing all humans is more than Fry can take though and with a little encouragement from Leela, he endeavours to find a more spacious place for the two of them to live, despite Bender’s protests to the contrary. 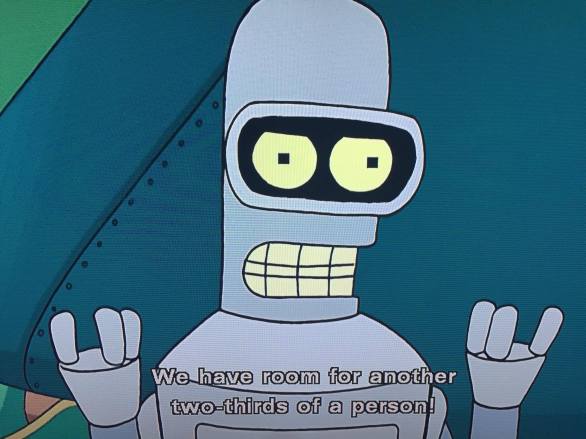 After deleting all his memories of his longtime apartment, Bender joins to search for a new apartment and while it’s not a long montage of would-be homes, all three are pretty wonderful, so I will present them without comment. 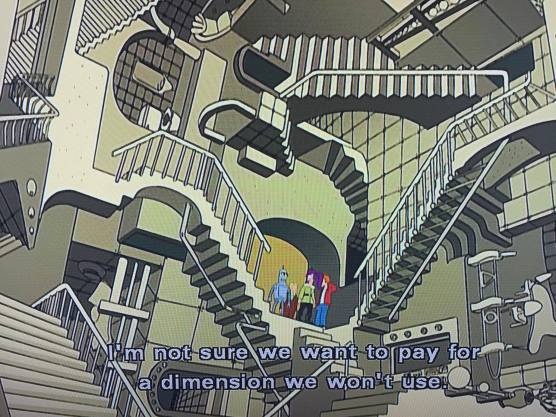 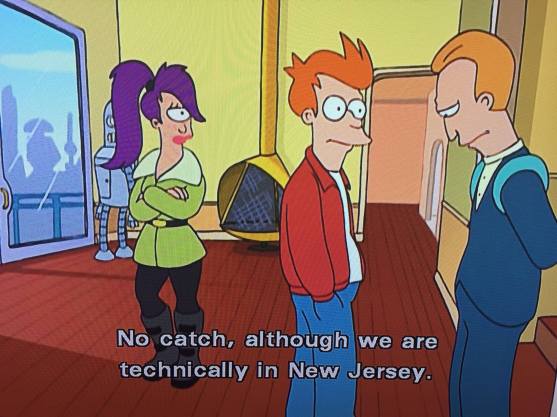 The cutaway from that last one to Fry stating “not one play even remotely liveable” is fire. Luckily, The Professor is very old and thus his friends die all the time, opening up a perfect place for our dynamic duo to live in after all! Huzzah! After being shown around by the more-hit-than-miss Hattie, the two get to decorating their bachelor pad.

But just as everything appears to be going smoothly we discover to our collective horror that Bender’s antenna interferes with the TV and cell signals in the building, robbing the residents of sweet, nurturing, brain destroying television, and resulting in them demanding he leave at once.

Devastated that his best friend would pick a luxury apartment with television over sharing a closet with him, Bender Charlie Brown’s away, all the way back to his original apartment. In fact, Bender is so depressed he stops drinking, resulting in Leela giving him a lecture that perfectly encapsulates the quirky tone of the show. You see, Bender needs alcohol to function, meaning when he stops drinking, he starts acting drunk, so drunk he reaches a moment of haunting truth.

After a little pestering on both sides from Leela, Bender shows up in a daze and cuts off his antenna in order to become Fry’s roommate again. While at first this seems a great solution, it becomes apparent Bender would be sacrificing too much and so they recruit our old pals from episode one, Smitty and URL – who have apparently forgotten all about that whole fugitives from justice thing – in order to search for the antenna.

Reunited with both his robothood and his best friend, Bender happily welcomes Fry back to his apartment. Fry, to his credit, is taking the situation well, but upon wondering if his fruit salad tree will get enough light (in this tiny windowless box), Bender reveals “there’s a window in the closet.” And yes, you guessed it, ‘the closet’ is enormous. 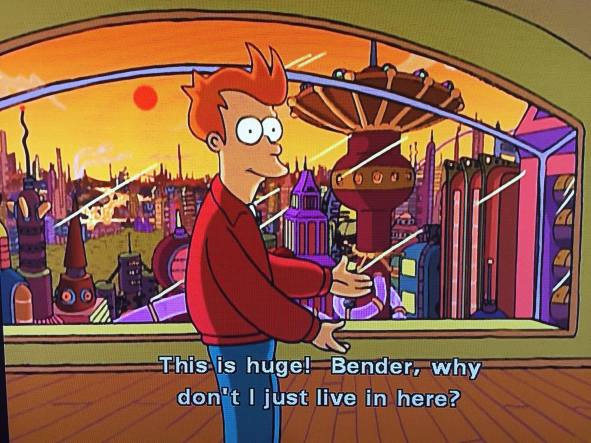 Thus Fry lives in the main apartment, while Bender laughs at him and sleeps in the… hallway? Cloakroom? What even is that room? Anyway, heartwarmingly silly stuff.

This episode feels very much like Futurama; it feels warm and cosy, and it has a lot of memorable moments that have stayed with me to this day. From the apartment montage to the Odd Couple parody, the miniature fruit salad tree to the reverse-drinking thread, this episode is a legitimate heavy hitter. And I don’t know about anyone else, but I adore the reveal that Bender has been sleeping in the cloak room and that there’s an entire luxury apartment attached and it’s one of my most vivid memories of the entire show.

Finally, the monotony of the ranking matching the running order is broken! There’s definitely no going back now. Have a little time for some extras? Step right this way:

Amy slipping on the tiny banana peel gets me every time, 75% of the dialogue from All My Circuits is fantastic, and there’s some delightful twists of phrasing with Bender’s dangerous sobriety, but for some reason my favourite gag this time around is Bender making good on his namesake and turning Fry’s alarm into a melting clock.

Yes, I’m a huge nerd who listens to the occasional audio commentary. None hold a candle to Futurama’s though. In fact I’m so into them, I’ve decided to extract the highlights of each one for your reading pleasure. No need to thank me. That being said, this isn’t a great one.

In case you hadn’t noticed it at the bottom of the site, I also contribute to The Reel World, a film & TV website and podcast. While I’d love you all to read/listen to all our stuff, you may find of particular interest our latest mini-series, ‘Firefly Now, Serenity Later’, in which we are going through every episode of the beloved Firefly. Go. Do.