Phillip J. Fry just became a trillionaire and he started out as a delivery boy, so what excuses for not being disgustingly rich do you even have?

Obviously something isn’t working here folks. In my head two editions a week was an achievable target but given I’ve been late with an episode, taken a week off and then only managed one instead of two, that clearly isn’t the case. So for now I’m going to scale things back to one episode per week and for the sake of alliteration it’s going to be the end of the week. Ergo, Welcome to Futurama Fridays!

Following on from one of the best cold opens in the show (Fry being kept up by the sound of bed springs that are in fact just two spring-based robots in need of greasing) this episode starts out with an amazing piece of Year 3000 technology, namely: ads beamed directly into your dreams!

What a freakin’ concept. The possibilities are as amazing as they are terrifying. Although speaking as somebody who forgets their dreams the second they wake up, I don’t think I’d be the ideal candidate for such an advancement, as much as I’d love to be manipulated into buying a pair of Lightspeed Briefs (and who wouldn’t?!)

After explaining the technology to Fry (and the audience, guh) the gang naturally sprint for the nearest mall to make some… semi-consensual purchases immediately. Unfortunately, given that he’s a piece of garbage, human garbage, and a delivery boy at that, Fry can’t afford anything. This doesn’t stop Bender from donning a superfluous sickly green sweater and shoplifting to his heart’s content of course. Guess how well that goes for him.

While Fry might be able to brush off his inability to stretch to luxury brand underwear, it’s when he can’t contribute a sufficient amount to Bender’s bail that he has his eureka moment; See Fry had a savings account back in 1999 and the bank he opened it with are still active (unlike credit card companies Visa or American Express), so there’s a chance his frugality will pay off after all. Maths alert!

Congratulations indeed! And what is Fry going to do with his staggering new wealth? Why purchase priceless paintings, launch them from a trebuchet and then shoot them with laser guns of course! Quite frankly, wouldn’t we all? He also wants to take his friends out for pizza and his topping of choice is anchovies. Unfortunately, they’ve been extinct for almost 800 years so that idea will have to REMAIN FIRMLY IN YOUR MINDS BECAUSE IT’S THE CRUX OF THE ENTIRE EPISODE. Oh, and the Pizza Robot is a phenomenal one-off character.

Consoling himself, Fry buys a 20th Century apartment decorated with as much tat as possible. Speaking of tats, Amy remarks how Fry’s primitive old TV would have such low picture quality one wouldn’t be able to make out her obscene tattoo. 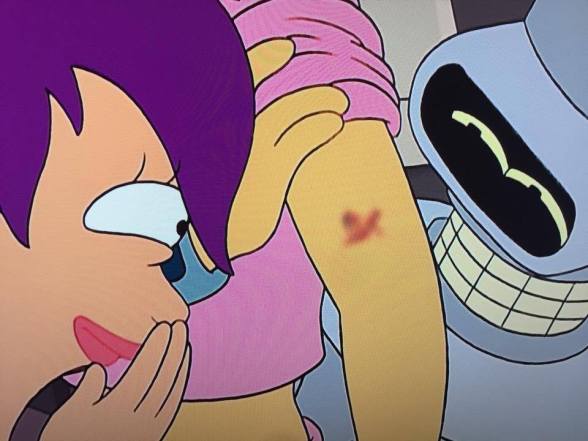 I don’t know what it is, but whatever it is, it’s my new kink. Getting a taste for dumb purchases, Fry heads to an auction where not even Ted Danson’s skeleton can satiate his bloodlust. Given the events of two minutes ago, what do you think WILL satisfy him? If you said an unopened tin of anchovies you win a prize. It’s a pair of Lightspeed Briefs and you can collect them in the Year 3000.

Given their extremely rare status, bids go through the roof for the salty fish with Fry finding competition in the form of the richest business person in the world: Mom.

After his bid for one jillion dollars is rejected on the grounds of that not being a real amount of money, Fry tries again with the obscene number of $50m and is 100% more successful. Conceding defeat, Mom returns to her office where we get to see the real her.

Delightful. Mom is a pretty hit and miss character for me. Sure her dialogue is delightfully obscene, but she’s just not stupid enough to trade shots with Zapp Brannigan and company. Still, it’s always great when she slaps her children in unison.

Anyway, Mom is in fact a megalomaniacal tyrant who wanted the anchovies because their oil would lubricate 10 robots for life, rendering her lucrative robot oil business useless if somebody were able to clone the anchovy DNA and mass produce it.

Having been outbid, Mom sees no other recourse than to bankrupt Fry, forcing him to sell her the anchovies, and thus sends her three loyal sons Ignor, Larry and…. to kidnap him. But rather than simply steal the anchovies in the plenty of time that he’s unconscious, they instead stage an elaborate rouse wherein they try and convince Fry he’d been dreaming this whole time and was back at Panucci’s Pizza. Why? Because Fry is a TV character and thus says and does things normal people don’t, such as announcing his PIN number is the price of a cheese pizza and a large soda back at his old job.

But in order to assure complete 20th Century verisimilitude, the boys require somebody Fry will recognise. And who better than Pamela Anderson?!

Firstly, uncanny. Secondly, pretty good get for a brand new show. Despite his unparalleled street smarts, Fry falls for the bait hook, line and sinker. Hey, how appropriate is THAT given this whole thing is about fish? GOD I’m smart. Gleefully announcing Pam’s order of a cheese pizza and a large soda comes to $10.77 (good value?), Fry is promptly knocked out, robbed and left in the gutter, rudely awoken by a Repo Robot taking all of his possessions. John DiMaggio voices the hell out of said robot.

Coming to realise his friends were what was important to him all along, Fry resolves to put his $50m anchovies on a pizza and share them with the whole gang. Mom’s reaction to her backstabbing scheme all being for nothing:

Still. She’s got several billion dollars and her empire remains unchallenged for another day. Naturally everybody is disgusted by Fry’s sweet attempt to share the past with them because ANCHOVIES ARE DISGUSTING, something Fry readily admits! Luckily, Zoidberg consumes them all in a murderous rage.

Preeeetty good episode here. Not the best so far, because I, Roommate takes some beating, but I’m willing to put it ahead of the pilot. It’s got a compelling plot fuelled by legitimate maths/science, the introduction of one of the longest-tenured recurring characters, a tonne of great signs and background jokes, Rich Fry is the bomb, and a convoluted plan ends up being unnecessary as things come to a conclusion in the dumbest away possible. Essentially the blueprint for all good episodes of the show. There’s also a lot of fun references to old TV shows.

“I’ve discovered something even more important. My friends. And they aren’t worth even a penny to me” is good writing. Bender demonstrating just how rich Fry is by putting on a monocle is lovely. But for me it’s all about the sheer lack of necessity for the Professor to inject fluid into an egg to demonstrate how advertisements get into the human brain. 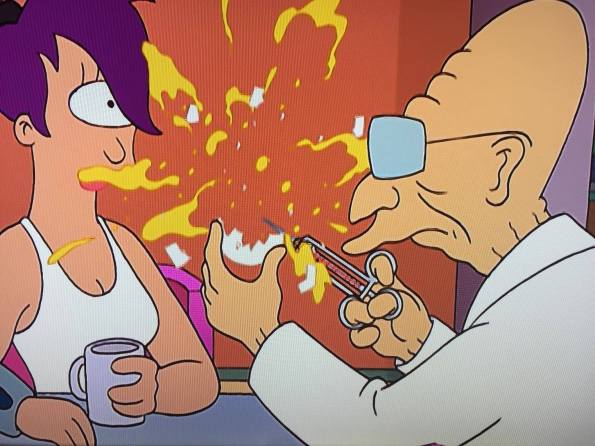 Count me in for that kind of absurdity ten times out of ten.

This whole ‘include the best parts from the hilarious commentaries’ feature I had sure is feeling like a misfire so far. I promise they get really, really good soon.