Futurama can teach us a lot of important life lessons, but could any of them be more salient and inspirational than being able to literally drink your way to the top? I certainly doubt it.

Futurama Fridays! It’s totally a thing! Tell ya pals! On with the episode. 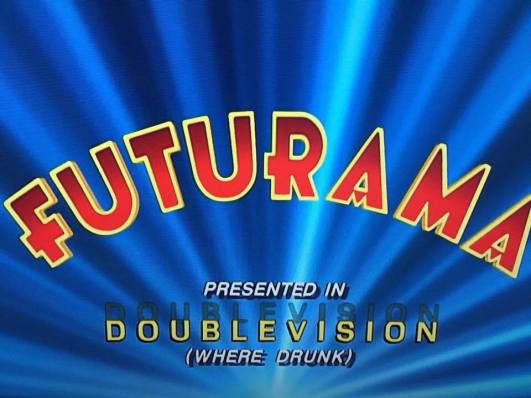 Hey remember when Bender quietly confessed his secret desires to be a folk singer? Well he’s ready to reveal another layer to his multifaceted psyche within seconds of this episode as Leela and Fry catch him watching Cooking With Elzar. This of course marks the first appearance of the wonderful purple four-armed celebrity chef who will eventually claim a respectable spot on the recurring characters list but for now it’s mild sauce. Get it? 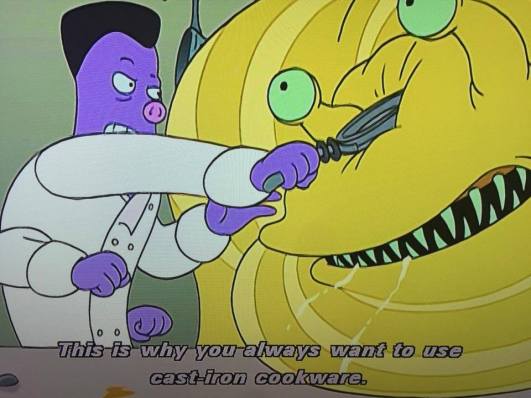 Fry attempts to make him feel better about this by claiming he likes cooking too – and I’m sorry but no. There is simply no way that Philip J. Fry has ever cooked a successful meal in his life and I refuse to believe otherwise.

Luckily for Bender and his long-harboured desires, Hermes has determined he needs to actually do something to justify his pay cheque and thus he gracefully accepts the position of staff cook. To celebrate, Bender is determined to make the Neptunian Slug dish he saw Elzar make and that means a trip into New New York where Fry is easily distracted. 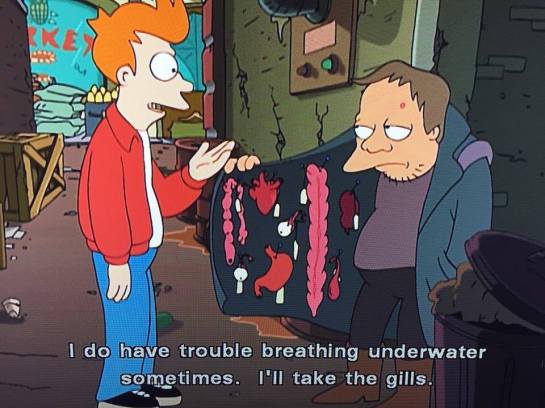 Leela of course saves him from having his lungs removed by applying boots to faces, but then proceeds to give Fry a good talking to about being less of a dummy. If you have a buzzer you press when you’ve determined the driving force of an episode you should be pressing it…. now.

The Professor interrupts the lecture with an important delivery to Trisol in the Galaxy of Terror, which we’re assured is just a name. A pretty bitchin’ name. So off we go! Along the way the crew have to endure Bender’s hilariously bad facsimile of Neptunian Slug riddled with 10% less than a lethal dose of salt. This is also important. 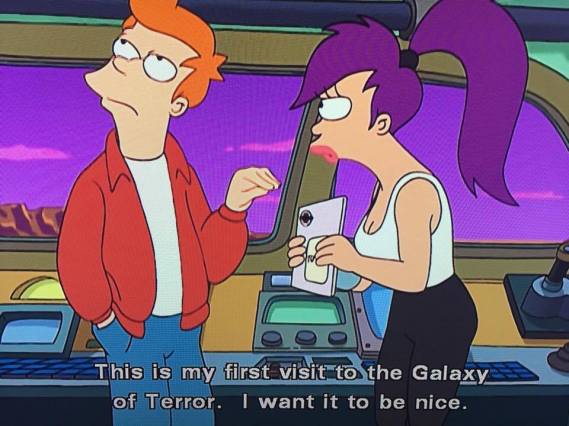 Despite thinking he’s an idiot, Leela still feels the need to let Fry do his job and make the delivery, which says a lot about her if you think about it. Remember, a large part of her bond with Fry comes from the same place as her need to protect innocent animals. So no matter how world-weary she is about being surrounded by incompetence, she can’t help but be nurturing. Anyways, Fry rightly points out he’s been delivering things since  (just under a thousand years) before she was born and heads off with the envelope with no snafus whatsoever.

Oh! Except for the three freakin’ suns this planet has… Ohhhhh, Trisol! If only he hadn’t recently consumed a massive quantity of salt. Ah. Sucks to be you, Fry. Finally reaching the seemingly abandoned palace, Fry leaves the package on an empty throne upon the arm rest of which sits the most refreshing looking bottle of water in the history of animation. Seriously, I’m thirsty as heck just looking at this thing and as far as I know I haven’t eaten any Neptunian Slugs drowned in salt. Determining there’s nobody around to witness his simple thievery, Fry quenches the ever-loving hell out of his thirst, consequence free. Except… 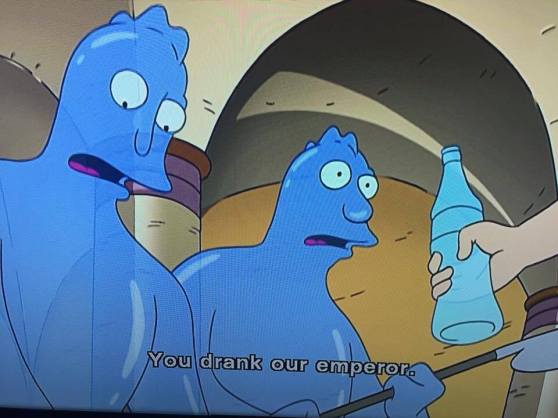 Yeah. Improbably, Trisol is inhabited by a species of aquatic lifeforms and Fry literally drank their emperor. In fact, the delivery he was making was a sign that said Please Don’t Drink in english to accompany the handful of similar alien signs. Fantastic.

But rather than murder the assassin of their leader, the… Trisolians? Choose to make Fry their new emperor. So that worked out pretty gosh darn well, don’t you think? As his first act as ruler of an entire planet Fry makes Bender his Prime Minister and brushes off Leela’s latest lecture. Gotta say, dumb luck has done him pretty well so far. Time to enjoy the perks of ruling with a visit to the Royal Harem. 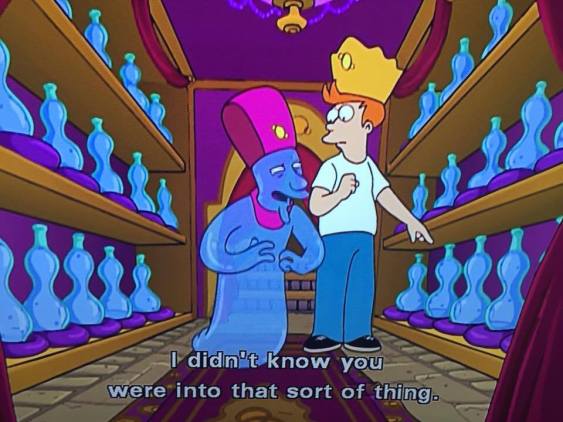 Love it. Love everything about it.

It’s not all bottled consorts, grapes and fanning though. Fry has to flawlessly recite a sworn oath at a commencement ceremony. Or else. I added the ‘or else’ but the chief advisor definitely has that tone to his voice. Still, Fry’s not too worried. Leela however is, and drags him away from the comedy styling of Florp to try and warn him that the average reign of these emperors is a week because they simply drink their way to the throne. 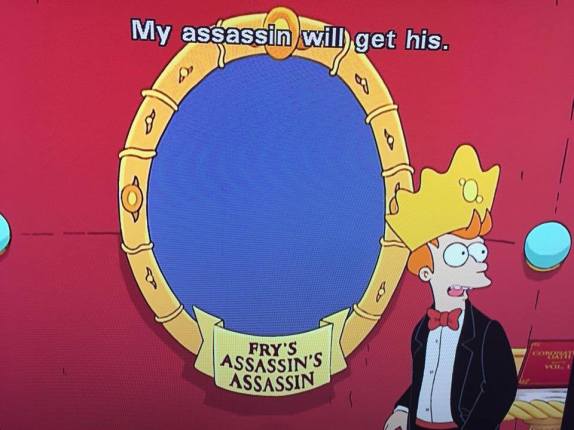 I genuinely love what an optimist Fry is and that’s not a sarcastic knock on his intelligence. I also love this tuxedo and crown look he’s got going on. A frustrated Leela keeps trying to get through to him, but he waves her concerns off by telling her a parable so beautiful I’m just going to type it verbatim.

How in the blue hell do you come up with something like that?

Leela gives up and heads back to the ship to wait until an undetermined number of the crew return, leaving Fry to read the oath from his arm like the cunning fox that he is. Despite a stumble when he was explicitly told it had to be flawless, he passes their test and is given a robe that demands he take his shirt off and everybody starts celebrating as the three suns set. As shade covers the land, the Trisolians begin to glow aaaand you guessed it… 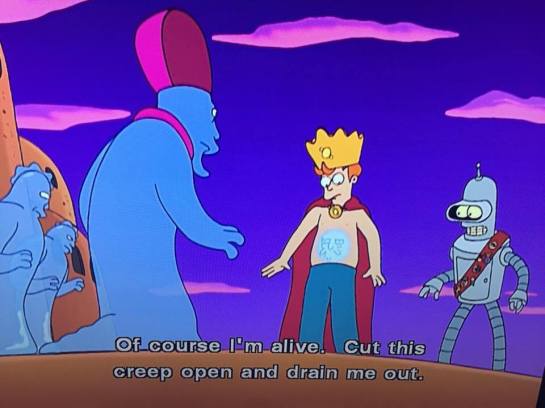 Cheese it! Taking cover inside the palace – which for some reason the Trisolians can’t get inside despite being able to turn into moving puddles – Fry, Bender, Amy and Zoidberg begin brainstorming ways to extract the previous emperor in order to save Fry from execution. Emperor Bont refuses to be sweated out but for some reason is okay with urination, vomiting or crying. Weird dude. Their plan hits a pretty major snag though. 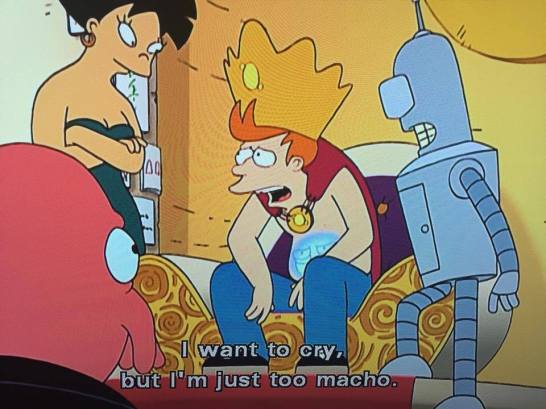 I feel ya, bruh. Bender tries to assist the process but Fry legitimately has bulletproof self esteem, another thing that makes him a great character. Giving up, they agree to call Leela for help just as the Trisolians wheel out the Juice-A-Matic 4000. Despite Fry’s harsh treatment of her earlier, Leela shows up to start laying the smack down on the aquatic aliens… who outnumber her many-thousand to one, and to be honest does kicking them into puddle form actually do anything to hurt them? Surely they just reform.

Seizing an opportunity, Bender pretends that Leela is brutally savaged by the mob, deeply distressing Fry, exploiting his biggest weakness: his intense love for his friends. 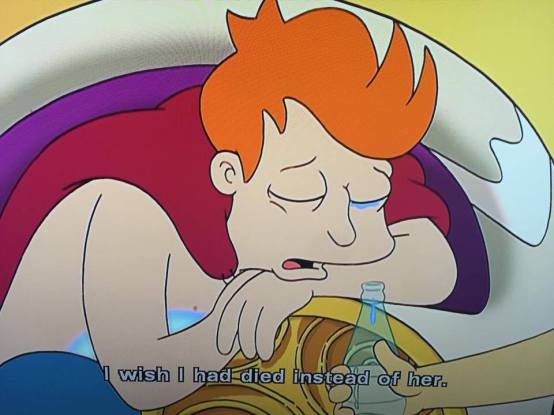 And he means that. What a guy.

Leela shows up to ruin the plan, skipping over how she got in when an army of liquid lifeforms couldn’t, but she’s got a new idea: kick Fry’s ass. Simple. Elegant. Successful. Yes, the show’s seventh episode draws to a close with half the cast wailing on the protagonist so he can cry enough tears to fill a bottle and avoid his certain death. 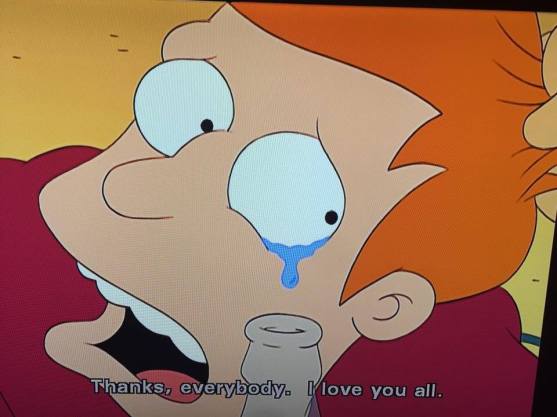 If this episode ended as well as it started then it might just have found its way to the very top of the list. It’s got a tremendous classic sci-fi premise in the Trisolians and Fry inadvertently drinking their emperor in a real Homer as head of the Stonecutters moment, some fun one-off and recurring characters being introduced, and all of the stuff with the market and back-alleys is top-notch. It even delves into the minds of our three main characters to varying degrees. Unfortunately the events from the previous emperor being revealed to be alive to the closing credits feel very rushed and as a result the episode doesn’t stick the landing. I also slightly prefer Rich Fry to Emperor Fry so it slides into third place.

Lots of good stuff in this one. I really like the Trisolians playing glasses that they’re inhabiting. I like Florp. I like the sign saying Please Don’t Drink. I like the Royal Harem. I love Fry’s story about the grasshopper and the octopus. I love the line reading of the junkie at the crack vending machine. I love somebody trying to drink Fry. But for me there’s only one rightful winner here: 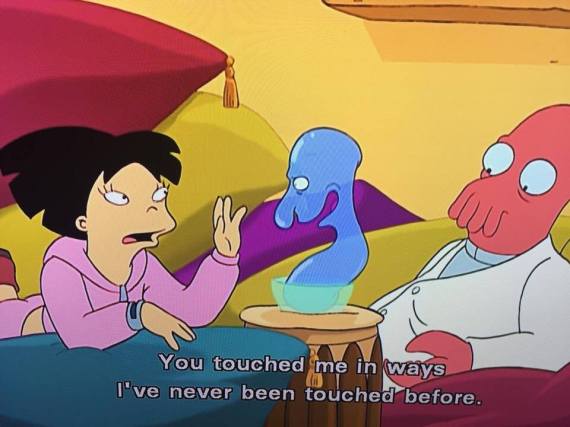 Billy West is here for this one, and generally speaking his energy makes for good commentaries. This still isn’t one of the ones I’d recommend seeking out, which I SWEAR are coming in the next season or two.