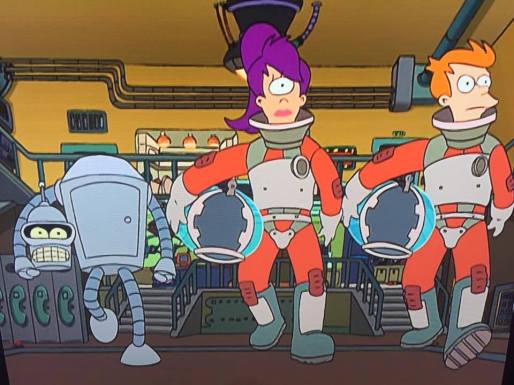 No, that’s not a description of your beloved author of these fine articles about a 20 year old cartoon, it’s the title, silly! Who wants to learn about environmental conservationism?!

Anybody pick up on that typo in last week’s column in the story of the Grasshopper and the Octopus? If so you win the no-prize. Congratulations. It will be posted to you in twenty equal instalments of one twentieth of a no-prize. Don’t you dare throw it away, because you’re about to learn all about what happens when you throw too much away! 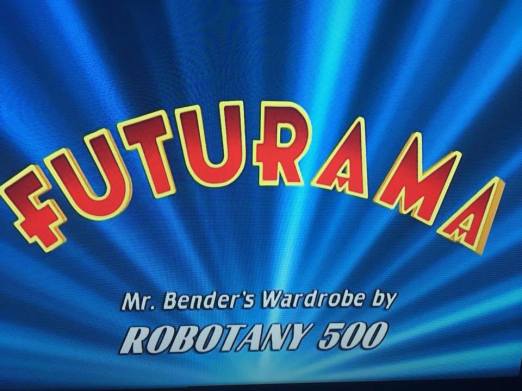 I’ve not been covering most of the cold opens so far because generally, while funny, they’re throwaway… which I guess is exactly the definition of a cold open but still! This time is an exception however as we learn that Professor Farnsworth is attending The Academy of Inventors’ annual symposium where he will be entering a radical new creation. What is it? The freakin’ Death Clock! That’s right, stick your finger in it and it’ll tell you how long you have to live! 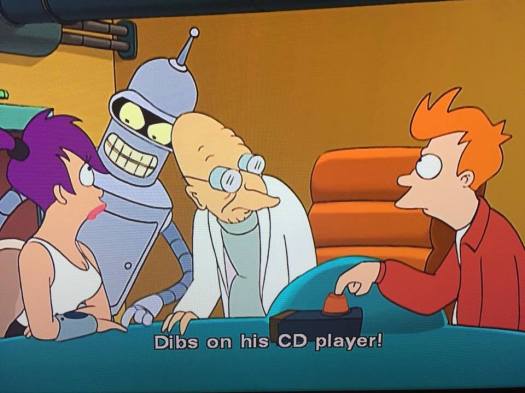 I adore this kind of clunky dystopian future tech. It comes from the same place as the suicide booths and a number of other dark whimsy inventions Matt Groening and company cooked up.

Anyway, at the symposium we begin to get a handle on exactly how old The Professor is,  at 149, easily the oldest living member of the academy and having had an arch nemesis for slightly over 99 years, namely Ogden Wernstrom. 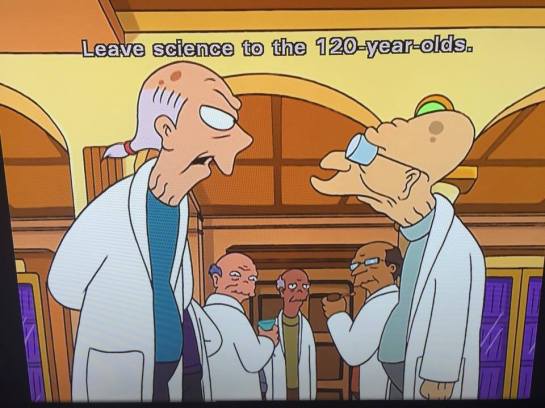 Wernstrom is a funny one because the character in himself isn’t all that special, but just as it was funny hearing Jerry Seinfeld say ‘Newman’ with utter derision, every single time Oggy pops up we get to hear The Professor curse his name, and it’s always a delight. So does that make him a great recurring character by association? Find out for yourself!

Anyway, Wernstrom holds a grudge against Farnsworth because he gave him an A-minus in his class at Mars University due to penmanship issues and is determined to ruin him. I wonder if that will happen in the next three minutes… He does his best by presenting an ADORABLE invention in the form of the reverse-scuba suit.

Freakin’ look at this thing. Does it count as a character? It has a name (Cinnamon!) I’m sorry but it’s by far the best one-off character in the history of Futurama.

Still, as ridiculously cute as a reverse scuba suit makes a fish, it surely can’t beat out Farnsworth’s mighty Death Clock… except The Professor presented it last year and was laughed out of the building. Learning this, he hastily sketches a new invention on the fly, one that will leave a lasting legacy on the entire history of the show.

Yes! The Smell-o-Scope! Solver of mysteries and catalyst for continuing the stories of at least a half dozen episodes right up to the end of the show. The Academy of Inventors’ obliterate every shred of credibility they claim to have by mocking the mighty creation, earning the worst grade imaginable: ‘A-Minus-Minus’! The shame.

Down in the dumps, The Professor briefly gives up on science, but a half-hearted motivational speech from Fry fixes him right up, allowing him to remember he already invented the Smell-o-Scope a year ago. Handy! Fry sniffs some planets and other celestial bodies having the time of his life until… 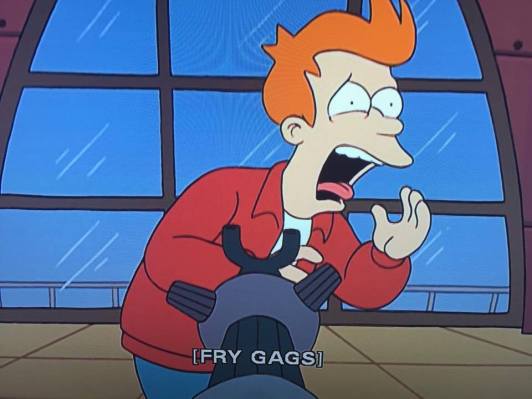 Billy West’s delivery of this gagging noise is gorgeous in its hideousness. It may even make you want to gag a little, depending on your fortitude. Yes, Fry has sniffed the smelliest object in the universe and whatever it is, it’s heading straight for Earth where it will collide with New New York and probably kill everybody. The crew get the lowdown from an old video from the 2000s narrated by Billy West in truly stellar fashion. There are two or three of these hammy tales of caution and everyone one of them is perfect. 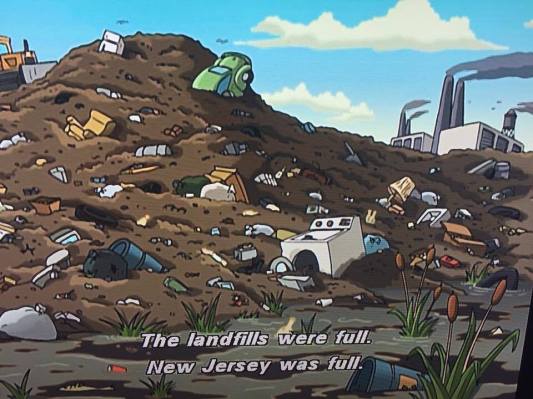 As it turns out, us 21st Century folk littered so much that we ran out of room for all our garbage and endeavoured to strap it to a rock and fire it off into space, creating the current predicament. Leela proceeds to tear into Fry as the only available representative of the 20th Century for his people’s wasteful ways, championing the widespread recycling of the Year 3000.  Good for them.

Presenting their findings to the maturely named Mayor Poopenmeyer (great name, decent voice, not much to the character), with backup in the form of a transmission from Neptune featuring yet more wretching Billy West, a state of panic is declared in the first appearance of our delightful newscasters, Morbo and Linda:

Terrific. Morbo is going to end up pretty high on that-there list of recurring characters, let me tell you, but for now it’s a pretty sedate appearance.

Brainstorming with the mayor, his science advisor Wernstrom and the military, The Professor decides the best way to deal with the big ball of garbage is to plant a bomb on it and blow it into chunks, Armageddon style. And thus our heroes set off to inevitably fail because there’s still 7 minutes of the episode left. But what should they find on the asteroid covered in 20th century junk? Why, the second overt reference to The Simpsons of course! 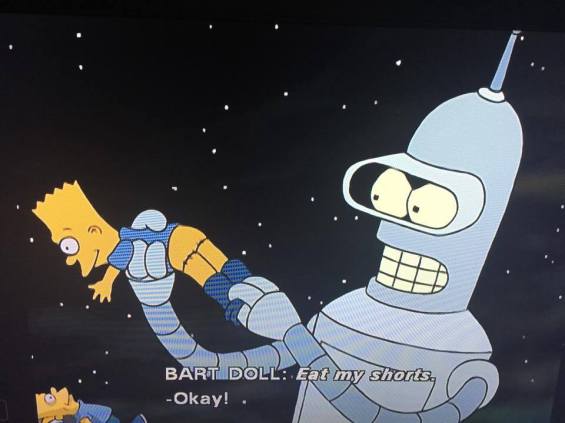 Completely ruining the plan is a trial run at a phenomenally clever piece of visual humour that will return later; The Professor had installed the bomb’s display screen upside down and set the timer for 52 seconds instead of 25 minutes, resulting in the clock going from 25 to 15 to 05 minutes to ‘6h’ minutes on account of it being upside down. Top. Notch.

Bender tosses the bomb into the atmosphere to save them from a premature death, but at the cost of sealing New New York’s fate. Luckily, their welcoming committee are quick thinkers:

Yes, everybody is doomed, and worse yet, Wernstrom cons his way into getting tenure and then just leaves. Wernnnnstrommm!!! The Professor suggests launching an object of the same size and consistency as the garbage ball at it, but can’t think what that might be. That’s right, Professor Farnsworth, a professor, completely gives up on the problem. Luckily, Fry, a sweet dullard, comes up with the eloquent solution of more garbage. Say what you want about Fry, but in my mind he just saved New New York one episode after temporarily becoming Emperor of Trisol. He’s doing alright for himself.

The only problem is Year 3000 New New York is clean as heck which means Fry has to teach them all how to litter in order to save everybody’s lives. Futurama’s sense of teaching moral lessons is great.

Anyways, the plan works perfectly despite The Professor forgetting what he’s doing during the countdown and the new ball of garbage knocks the old one into the sun, presumably creating an almighty awful stench nearby. For his efforts, Farnsworth is given Wernstrom’s trophy from earlier in the episode, while Fry gets a handshake.

Gotta say, that might be a raw deal given he inspired the final plan and they would not have been able to do it without him. Alas, true genius is seldom recognised in one’s own lifetime. Leela points out the new garbage ball is likely to make its way back to earth down the line, but Fry and Farnsworth dismiss her concerns on account of that being the future’s problem. Then Vera Lynn’s ‘We’ll Meet Again’ plays over the end credits. Perfect.

I’ve gotta say, this episode is strong as hell. It even got nominated for an Emmy! It’s better than My Three Suns on account of sticking the landing. I think it’s better for A Fishful of Dollars too, on the strength of the info-vid, the introduction of Wernstrom and Morbo, the one-off appearance of Cinnamon the Wonder-Fish, the outstanding voice work from Billy West in particular, the healthy dose of wacky future-tech, the clever sight gag of the bomb timer being upside down and just being really funny throughout. However, it’s going to be tough to knock I, Roommate off the top spot because of how iconic that ending is, in addition to the excellent character work for Fry and Bender. Close though.

Enormous fan of the informational video doubling as pornography, particularly the line reading of ‘with gusto’ by Maurice LaMarche. I like Fry claiming the the 19th century probably copied the 20th century when they invented things. But there can be only one winner here in a STRONG contender for absolute best Fry moment: 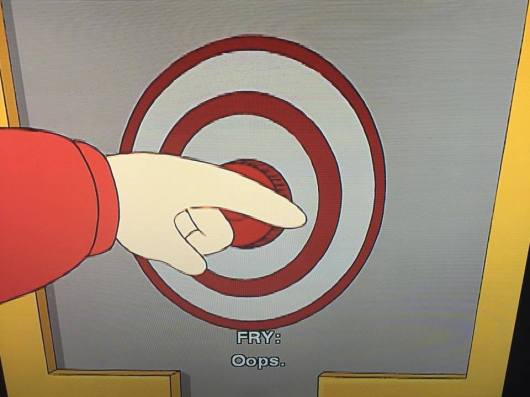 This is probably the best commentary so far but they’re still not what I’ve been limply promising. John DiMaggio is funny and energetic while the production staff aren’t terrible. What more could you want?