Fry’s off to college and his roommate is… a monkey? With a hat? Who can talk? What the heck is this show?! Oh that’s right, utterly awesome.

I’m back, babydoll! Life update: I moved house a couple of weeks ago and the process of packing and moving everything in and getting things set up completely kicked my ass. More so than I’m proud of. As a result “Oh, I can skip a week” became “Oh, I can skip two weeks.” And so on to the point I think it’s been a month since I posted here. Part of me thinks it would be better to post less screen-caps. Part of me thinks I should go into less detail in the write-ups. But screw that noise! Hopefully my life is settled enough now that I should be able to get back at this with gusto.

We remain in the nebulous area of episodes written and produced as part of season one but broadcast as season two, so the tone and things like the voice actors’ comfort with their roles are going to drastically change soon. That being said, the back end of season one has some incredibly strong material including this absolute banger of an episode, so what say we quit this jibber-jabber and get into it? 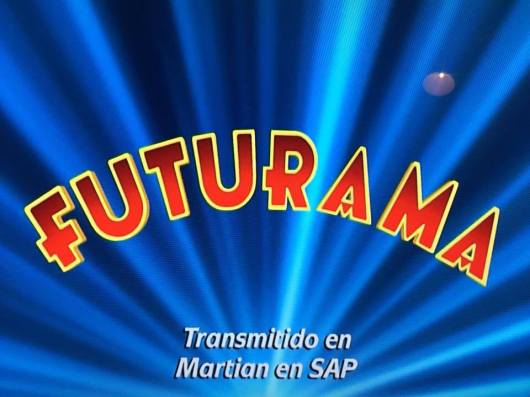 Good news everyone! That being a catchphrase has fully kicked in at this point as The Professor informs the crew they’re heading to Mars. Freakin’ Mars, dude! That’s right, while we went to the moon almost immediately it’s taken 11 episodes to go to the planet our species is most fascinated… aside from our own. It’s a harmless crate that needs to be shipped to The Professor’s office at Mars University. A harmless crate. Perfectly harmless.

After some sick burns at the expense of Utah we learn that Bender went to Bending State where he was a member of Epsilon Rho Rho (with a minor in Robo-American Studies). We know our good friend Bender likes to exaggerate claims of his greatness from time to time, but we receive some solid affirmation of his legendary status when we head inside the Mars U chapter of the frat and he is given a hero’s welcome.

Bender is not best pleased with the lack of wild partying of the chapter, with some pretty geeky robots occupying the house, including the inexplicably designed Fat-Bot.

Deciding to whip these nerds into shape, Bender sets off on the B-Story of the episode, leaving Fry to be devastated by the revelation that advancements in educational standards mean his cool college drop-out status is now invalid. But wait… aren’t they delivering a perfectly harmless crate to Mars University? Yes, that’s right folks, Fry’s going to college!

He won’t be alone though, as Amy is a grad student whose parents own a large part of the university, so I guess she’s going to actually bother showing up for the duration of this episode and then never mention her studies again until it becomes relevant to the plot in season 5. This allows Fry to have a familiar classmate given most of the show’s cast are a little older. He’ll also have a familiar professor, enrolling blindly in Farnsworth’s class: The Mathematics of Quantum Neutrino Fields, a title he made sound as difficult as possible to discourage anybody from taking it.

While Bender and his crew get to work reenacting Animal House but with robot-based humour, Fry gets settled into his financial aid dorm room. Believing he has it all to himself due to the two desks, two chairs and two beds, Fry is stunned to hear a knock at the door from his new roommate.

Look. Guenter technically appears multiple times throughout the show. So do several characters that I have or am going to classify as one-offs. But realistically this is his only real appearance. The Robot Devil plays a major role in two episodes. Nixon appears a few times per season. Those are recurring characters. Guenter and Fatbot fill out some numbers in the background of scenes later on. So I’m sticking with their current status.

Anyway, now my being defensive about my own artificial classifications is out of the way, who the hell is Guenter? Why an adorable monkey wearing a tiny little hat that harnesses the power of sunspots to grant him with incredible intelligence and the power of speech. He was also what was in the perfectly harmless crate.

Unfortunately, he and Fry do NOT get along.

Bender’s shenanigans have started to pay off as he and Robot House are pulled up by Dean Vernon, a man who states why he likes being Dean out loud when alone in his office, making him the single weirdest character to appear thus far in this show set in the Year 3000 that features aliens, robots and everything in between. The Dean scolds them for their hijinks and puts them on probation, a situation that is only compounded when Fatbot sets eyes on Vernon’s beloved ship in a bottle.

Fry and Guenter’s rivalry escalates, with the latter besting the former in a class about the 20th Century, a time period Fry literally lived in, and then managing to get the phone number of a girl who shot down our beloved protagonist. Fry is so sick of his roommate that he seizes the opportunity to humiliate him at a fancy parents get-together, letting Guenter’s hat-less mother and father out of their cage where they promptly wreak havoc.

Humiliated, Guenter flees to his room for a cry and some bananas. We’ve all been there, my man. Fry and Leela arrive to console him (remember, Leela has a constant soft-spot for any and all animals), but Guenter has already succumbed to his crisis of confidence about his true nature and how everything special about him comes from the hat, freaking out in the middle of an exam, tossing the hat aside and scurrying into the jungle. The Professor is obviously devastated by this turn of events. 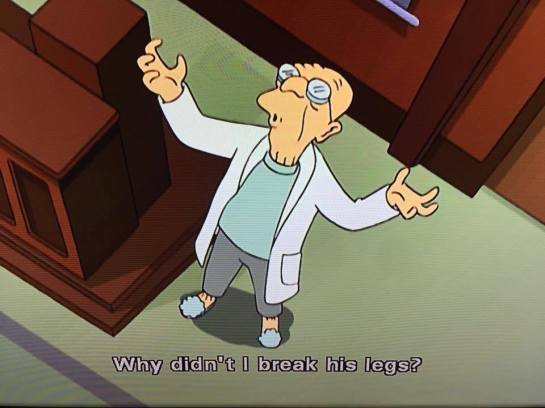 The gang endeavour to go find Guenter and let him decide if he’d like to be a regular ol’ monkey or a hyper-intelligent ladykiller by offering the hat and the banana and seeing who he goes to. Unlucky for them, their test is interrupted by Bender and Robot House zooming by on their barely seaworthy dinghy, splashing Fry, Leela and the Professor and knocking them into the river. But at least Robot House win the race they were taking part in and thus their probation is lifted. It’s funny, it’s just not as interesting as what’s going on with the monkey.

And what’s going on is that only Guenter can save our loveable trio from plummeting down a waterfall to their deaths by putting on his hat and doing some quick calculations, tossing a vine over a tree branch at just the right point to be strong enough to pull the gang out of the water. Unfortunately, the rescue sends Guenter plummeting to his apparent doom. The Professor is obviously devastated by this turn of events.

Amazingly, Guenter survives thanks to the hat breaking his fall, making it jauntier in the process. Oh, and it also only works at half capacity now, making him only moderately intelligent, a medium that he is more than happy with, though The Professor is disgusted by his new ambition to transfer to… business school.

Now where would this loose Animal House parody be without some good old end credit explanatory captions to inform us of what happened to all the characters? Fry successfully dropped out of college again, Fatbot caught a computer virus in Tijiuana, Leela and Dean Vernon went on a bad date, Bender robbed Robot House blind and Guenter… 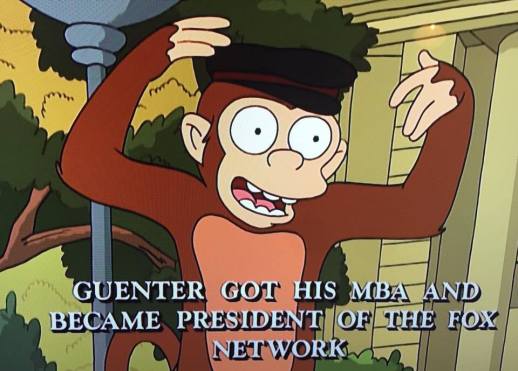 This is an intentionally snappier episode, a directorial choice that really pays off as the two stories play out briskly, moving back and forth fairly seamlessly. I kinda glossed over the Rooooboooot Hoooouse stuff but not because it isn’t funny, but more because of how much I love the Fry/Guenter rivalry. Tress MacNeille gives one of the best voice performances in the whole show despite it only being a minor adjustment from the generic child voice she uses throughout Futurama, The Simpsons and many, many other shows. There’s just a vibrant energy to her delivery of some very well written lines that makes Guenter so memorable.

Fry is a fantastic level of dumb throughout, it takes place entirely on Mars (cold open notwithstanding) and Bender’s chicanery is kept to the side where it belongs. Essentially, this is Futurama knowing what it is and pulling it off well. Our top three are staying where they are, but for sticking the landing better than the earlier season one episodes, ‘Mars University’ lands in fourth.

Fry holding his breath from the time they land until The Professor confirms the atmosphere is safe is good dumb stuff. Farnsworth saying he doesn’t know how to teach because he’s a professor tickles the part of me that’s dealt with a lot of shitty academics. I also laugh pretty hard at Fry giggling when Guenter puts the hat on his butt. However the following line is immortal to me:

Possibly the best commentary track so far but again, we’re not quite there yet. There’s plenty of interesting insight, while Billy West does a couple of voices on command, which is usually a winner.