Earth is about to be destroyed by television obsessed aliens and only one man can stop it. Unfortunately that man is Philip J. Fry so maybe people should start making peace with their god(s).

Would you believe it, I actually have no crazy life updates or excuses for delays. It’s a Friday and I am writing a Futurama post. Weird, right?! So uhh… I guess I better vamp a little. Doo-da-doo-da-da-da-doo-da-duh *Bender whistle* Okay cool, on with the show.

We open in the Year 1999 which was EIGHTEEN YEARS AGO as of this writing and thus I am approximately one million years old. Fry makes his first (and potentially only) successful on camera pizza delivery to a Fox broadcast affiliate to a lovely man who works in the control room. Why is he lovely? Well he invites Fry to watch the season finale of Single Female Lawyer with him and share his pizza and beer. I would not make this offer to some of my closest friends. Several minutes into the homage to the highest art ever created by humans, Ally McBeal, Fry knocks his beer over onto the console.

I love how much money Matt Groening has made absolutely roasting the company that write his cheques. This sick Fox burn isn’t just a sick Fox burn however, and is instead the entire premise of the episode. 1,000 light years away someone cares very much… 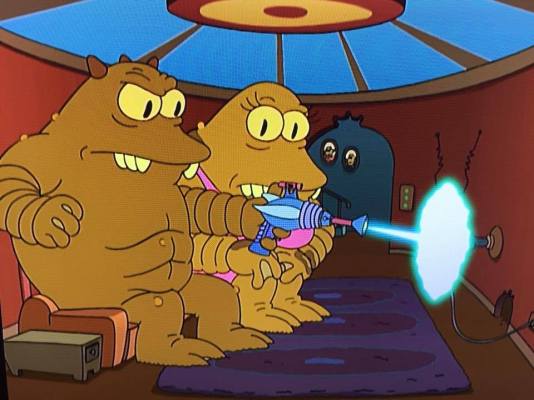 A LOT of beach schtick later, the gang are posing for a picture taken directly from Bender’s eye (VERY important for later) when suddenly…

Yes, a fleet of spaceships arrives to destroy the dozens of monuments gathered on the beach by a former governor of New New York who happened to be a super-villain, invoking Independence Day. In a stroke of writing genius, a tiny spaceship also destroys Fry’s sandcastle.

Moving on from the landmark-heavy beach, the alien ships begin to lay waste to the rest of the planet, prompting the current President of Earth, McNeal, to call for unequivocal surrender… until Lrrr, ruler of the Planet Omicron Persei 8 demands “Give us McNeal” at which point Da Prez does a 180 and declares that Earth will never surrender. But if we are to have any hope of fending off such a massive alien invasion we’ll need a brave and noble hero with guile and cunning, a pilot without equal, a warrior beyond measure. I think you know exactly who it’s going to be.

Yes, it’s twenty-five-star general Zapp Brannigan, hot off his bloody triumph over the pacificts of the Gandhi Nebula. Bender gives Leela her customary ribbing for having slept with Zapp in a regrettable moment of pity, and quite right too. But what’s the Zapper’s grand plan to save Earth?

Truly he is the hero this world deserves.

Taking things a step further, Zapp activates the patriotism circuit of all robots, forcing the otherwise cowardly Bender to hop-to-it and join the others in the draft class. Zapp clumsily briefs the new recruits, at first imploring them to destroy all aliens until he realises both Kif and Leela are in fact aliens. He then reveals the actual plan, flying directly into the alien mothership’s main cannons, clogging them with wreckage.

Completely ignoring the orders of their commanding officer, the fleet engage the mothership in a pretty well animated space battle with red and green lasers flying every which way. After taking a few hits, Planet Express Ship seals the victory for earth, destroying the alien ship. Well. That’s it. Show’s over… Until an even bigger ship appears.

I have several questions, all along the lines of what the hell happened over the course of a thousand years that meant the Hubble Telescope needed… never mind.

Sure enough the actual mothership absolutely wrecks shop to the point that ever-pragmatic Leela decides the heck with this and puts the ship in reverse so they can all die from the comfort of their own homes.

Not to worry though, Zapp has an even better plan: stuff a bag over President McNeal, leave him on the lawn outside one of the alien ships and knock on the door. The only problem is, he’s not the McNeal they’re after and so they kill him, opening the show up for an incredibly important ongoing plot point in a few episodes time. So if not the newly Dead Prez, who DO the aliens want?

See? It all looped back around. It turns out Lrrr and Ndnd, technologically advanced war-faring rulers of a mighty Omicronian empire spend most of their time watching television. Specifically Single Female Lawyer, the same show that Fry accidentally knocked off the air 1000 years ago from 1000 light years away. And thus the entire planet is held hostage because the aliens want to see the end of a thousand year old TV show.

Totally fair call. Unfortunately for everyone who likes being alive, most of the earth’s video tapes were destroyed in 2443 during the second coming of Jesus, a joke that I am 1000% sure got some letters sent to Fox. Thus their only hope is that Fry, the only person alive who has seen even thirty seconds of the show, can write a fake episode for the crew of Planet Express to act out.

I am entirely confident this is all going to turn out okay.

Still, the laughably awful amateur production does well enough that the Omicronians watch and chit-chat… until they finish Fry’s two pages of dialogue and are left with nothing left to say, leaving them to go off-script, something Leela is hilariously bad at, asking the judge to marry her as they go to a commercial break.

Leela reasons that her improv was clever and unexpected, causing Fry to drop some INCREDIBLY relevant truth bombs.

Lrrr confirms this, demanding the decision be reversed or else. Now Lrrr, are we watching TV or making it? Jeez. Fry elaborates that people watch TV to see the same thing they’ve seen a thousand times before and hastily scribbles some cue cards that have the judge drop dead and Jenny McNeal return to being a Single Female Lawyer. The second act of this fake show was a minute long and the season finale simply reversed an event that only occurred within the episode. Give it an Emmy!

But more importantly, what did Lrrr make of it?

Oh hey, it’s Mike Thomas‘ take on everything! Also I love that Ndnd is using the watercooler Lrrr demanded be set up for them to gather around earlier.

But as many of us know, a C is a passing grade and thus the earth is saved.

Saved I tells ya!

I won’t go as far as to say this is the worst episode of the show so far, but it’s certainly not up to the standard we’ve been spoilt with recently. Lrrr is just an incredibly meh character. We all know what his shining moment is, but that’s a while away. But this time if you take out Zapp’s amazing bit of command all you’re really left with is the all too brief fake episode of Single Female Lawyer and a lot of stalling for time.

I will say they did some pretty good work with setting up important plot details with throwaway jokes early on, such as Fry’s love of television and Bender’s eyes being fully functional cameras.

I really like the tiny spaceship blowing up Fry’s sandcastle. I also really like the whole bit with Bender readying camera one, camera two and the unseen camera three. But the winner as usual is Zapp Brannigan with an iconic and profoundly stupid line:

Maybe there just aren’t any good audio commentary tracks in season one. Maybe I should have just started this feature in season two. Maybe you should shut up. There are a lot of little tidbits but it’s not all that entertaining.